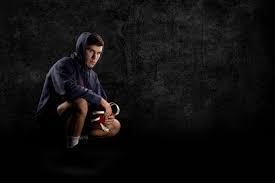 Dominant on mat and ace in the classroom, Forks' Tyler Ferrara is our Athlete of the Year

There is, within Section 4’s expansive boundaries, no athlete more far superior in his or her sport or sports of choice.

He is a wrestler through and through, has the mind for it, the skill set and discipline. Born to be? No telling, but certainly initialed to be, wittingly or otherwise. T.F., as in Tyler Ferrara but also Tech Fall, that match outcome fairly well connoting a whuppin’ administered. He logged five of those in the 2021-22 high school season, a total matched by December as a senior.

Chenango Forks' whiz kid is the Press & Sun-Bulletin’s 2022 Athlete of the Year upon completion of a calendar year in which he established himself as the finest hereabouts, among the tops in New York and, most recently, beyond.

There was that 37-0, state-championship season polished off last February in Albany, one in which he did not surrender an offensive point. Big-time stuff, to be sure. But then came a couple weeks ago, and a 6-0 showing on his way to the 126-pound championship at the 30th annual Beast of the East Tournament in Newark, Delaware.

And it was no sun-splashed beach stroll to supremacy. Following a pin and a tech fall, his mettle was called upon in subsequent 3-0, 3-1, 5-2 and 3-1 decisions − “Tough kids. Really long, tall kids, tough to score on.”

Ferrara, 99.2-average student with a No. 14 class rank, will attend Cornell University. Fellow Ivy League institutions Harvard and Princeton were considered, he shared, as was Binghamton University. Combine those classroom and mat-related credentials, a high school student-athlete’s options blossom.

He dabbled in football for Forks’ upper-echelon program before understandably opting out, and has remained active in the autumn running cross country with middling results. He, and all around him, grasp the grand plan.

“He’s very self-motivated and he was mature in that area at a very young age,” said David Hogan, who in his tenure as Forks’ director of athletics has seen his share of high achievers walking the hallways at 1 Gordon Drive. Hogan doffed a cap to Ferrara’s ample support system, specifically identifying Joel Ferrara, Tyler’s Dad and role model, for substantial backing along the path.

“This (wrestling) is his mission in life, at least at this stage of his life,” Hogan said. “Very driven, very strong, and he’s got the perfect attitude for an athlete. He’s so super-focused with what he wants to accomplish. He’s pretty much all-business.”

Ferrara commenced his 2022-23 season with a tech fall/43-second pin/tech fall/tech fall sequence to grab the 138-pound title in Oxford’s Clyde Cole Invitational, hit the road for the University of Delaware and emerged with that perfectly beastly resume booster, and bumped to 145 pounds − why not? − for a first-period pin at Oneonta the night after returning from Delaware.

To close 2022, he won twice by pin, once by tech fall and, lastly, by 10-1 decision to become the seventh four-time champion in 65 years of Windsor Christmas Tournaments.

This 17-year-old is as light on his feet while conversing as he is on the mat, speedy to respond, informative and enlightening and articulate at every turn. Just plain bright and refreshingly introspective, is what he is.

And so, the appropriate avenue is the straightest in this instance. As in, Tyler, the floor is yours.

Q: Cornell is the fit for you why?

“As I was making a decision, I was looking for a place that had everything I wanted, and when I looked at Cornell I saw everything. I saw wrestling, the academics, the coaching, teammates – it felt like home.”

Q: Last time you failed at something?

“I try not to look at my failures as failures because if I learn something from them, then they’re really not losses, I still win because I learn from them. But I would say the last time I failed myself was July in Fargo. Not from my wrestling ability, but I kind of let my mindset get into my own head.

“I thought I had to prove something that I didn’t need to prove and it caused me to wrestle poorly. But it helped me learn and that’s why I think I did so well (in Delaware). I went out there, remembered why I love to wrestle and why I’m doing it so it allowed me to have fun.”

Q: Describe the pride and the burden of being on top.

“I take a lot of pride in it because I’ve worked really, really hard to get here. I’ve put in ridiculous amounts of hours, worked with my coaches. The burden is, there are guys chasing you, you’ve got to know that you can’t stop working, there’s never an end to it because you know there’s always going to be a guy on your tail.

Q: OK, maybe not burden, but what is the most difficult part of being in your shoes?

Q: Please pardon if this sounds like an odd question, but: Are you prepared to lose?

Q: How do you suppose you’d react to a loss?

“It’s not like I haven’t lost in the past. I think it’s tough, no one enjoys losing. I think I’ll be upset for a little bit, come back, collect myself and go back to the drawing board, figure out what went wrong in the match, see the changes I need to make and get back on the horse, keep working hard.”

Q: What about wrestling and being so successful in the sport do the rest of us not understand?

“I think it’s the fact that you’re by yourself. It’s a team sport but it’s really not. You’re 1 v 1, you’re the only guy out there. There’s no one there to really help you, you can’t really blame anyone if something goes wrong. I think that I have the ability to do so well, be so successful just by myself − I mean, obviously, there are my coaches and teammates and everyone − but being the only guy out there I think is really special.”

Q: Most difficult part about staying fit and healthy?

“Probably eating healthy, getting proper sleep. I mean, there are cheat days, obviously, I’m a kid in high school. But just to know you’re putting the right stuff into your body because without that you’re not going to perform well.”

Q: Most significant difference between present-day Tyler and Tyler a year ago?

“I think I’m much more confident in myself. I think I’ve started to realize that I can compete with the best kids in the country. I think I realize that I’m on a new level that I wasn’t on before, so I think it’s the confidence that’s the game-changer right now.”

Q: This high school season will have been a success if?

Even the best are not immune to a slip, an instant of sloppiness or lapse in concentration that can topple intentions, and such a risk only amplifies given advance billing and accompanying target on his singlet. Ferrara is aware, on alert, and seemingly embraces the challenges ahead.

The season now winds toward Feb. 24-25 state championships at MVP Arena in Albany, where last winter Ferrara was part of a 5-for-9 showing by Section 4 athletes in the final round. State runner-up two years before to conclude 36-2 season, he was a 5-2 winner against Brayden Fahrbach of Mount Sinai — once-beaten into the final.

Preceding the title match were two pins and a 15-3 decision.

Work remains in the interim, of course, but we’ll go ahead and venture that this ultra-determined young man is up to it.